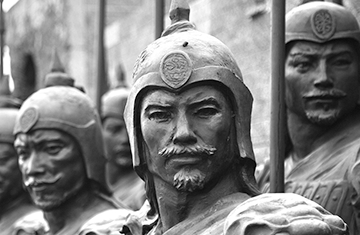 Ba Renzhong hobbled through the wide streets of Tiangjin. Guards marched ahead and behind him, and he was shirtless so that the people lining the streets could see the marks of flogging ripped into his back. A heavy wooden cangue had been locked around his neck and both wrists. Until recently, he had been Lord Ximen’s general, and presided over a number of exile sentences himself. Despite being demoted to colonel, Lord Ximen had decreed his journey to Ganyang would be made as wretched as possible.

A few members of the crowd booed and jeered, but most watched in silence.

“Ba Renzhong! You saved my son from bandits! Gods protect you!” a woman cried out.

Ba smiled, and looked for her, but she ran away before the guards could find her.

Eventually he came to the gate from which the road to distant Ganyang began. A border province a hundred days away and full of criminals and barbarians, Lord Ximen had exiled him there as a death sentence. Ba looked this way and that, but there was no sign of his little brother, Ba Jiang.