The Purple Demon – Ba’s virtue gets rewarded by Thaddeus White 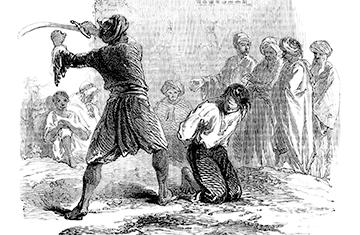 Ba Renzhong’s hands were bound, and he was escorted through the streets of Ganyang, into the military district, and thrown into prison. After several hours contemplating his predicament and meditating on his fate, he approached the bars and asked a guard to come closer.“It’s likely I’ll be dead tomorrow. I’d like my last meal if I may,” Ba asked.

The guard laughed. “Sure, sure. I’ll get you a bowl of empty air and a cup of nothing! As if General Gao wants you stuffing your face. The army can’t waste money paying for a criminal’s gluttony.”

Ba folded his arms. “A final meal is an ancient principle and decreed in imperial law.”

“He’s right, you know,” Iron Belly said. He strolled to the cell, bearing a tray. Ba’s nostrils twitched at the smell of steaming dumplings and fresh-cooked beef.

The guard scowled. “These are General Gao’s orders, sir. They must be obeyed.”

Iron Belly smiled. “I’m going to give my friend his last meal. You can look the other way, or I can bruise more than your pride. It’s entirely up to you.”